This Sunday the Catholic Church celebrates the assumption of Mary, Jesus’ mother, into heavenly glory. The dogma of the assumption, like that of Mary’s conception without sin, flows from her role as the Mother of God.

Mary is not only Jesus’ mother but the first believer in her Son. She trusts the word the angel brings to her — that she will bear the Son of the Most High. Her kinswoman Elizabeth in the gospel for this feast praises Mary for believing that God will fulfill this word.

The dogmas that describe the beginning and ending of Mary’s life derive from her motherhood and faith. To be the mother of God, God fills her with grace and keeps her free from sin — her immaculate conception. As the mother of God and model believer, Mary shares Jesus’ victory over death — her assumption. Her son conquers sin and death; Mary shares in his victory. Elizabeth Johnson observes, “The Immaculate Conception is not so much about the absence of sin as about the presence of grace and about Mary’s vocation in salvation history. This dogma testifies, ‘God’s grace is more original than sin’” (Dangerous Memories 35).

The Eastern Church especially celebrates Mary’s dormition or falling asleep; in fact, in the 5th century the feast of Mary’s dormition was celebrated on August 15 throughout the entire Byzantine Empire. Icons picture Mary lying asleep on a bed with Jesus standing beside her, holding her like a baby in his arms. The icon reverses their relationship with Jesus caring for his mother as Mary cared for her son.

In celebrating Mary’s bodily assumption into heaven, this feast celebrates the faith we express every time we proclaim the Creed, “We look for the resurrection of the body and the life of the world to come.” We believe that we will one day share eternal life bodily, not just as spirits or souls.

Human existence is bodily existence. The risen Jesus who ascended into heaven is truly human and truly divine; he continues his human, embodied existence in glory. He is the firstborn of a new humanity. The dogma of the assumption proclaims that Mary as a whole human person, body and spirit, lives with God in glory, one like us who will be waiting to share eternal life with us. 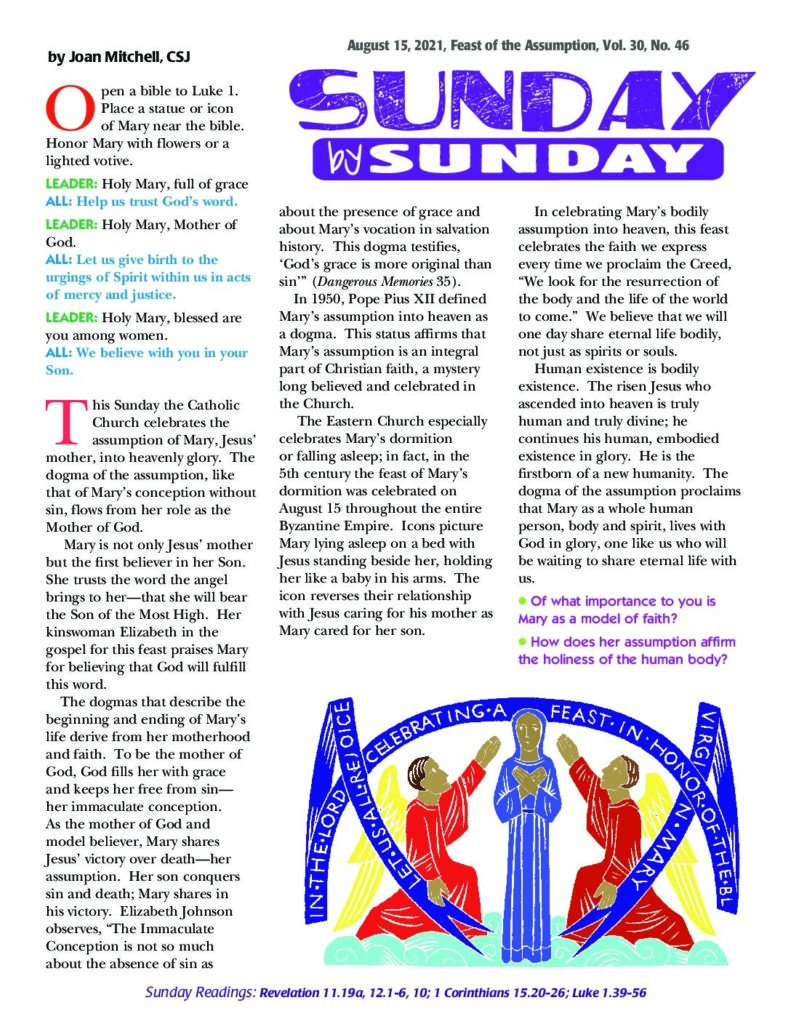