Each of the four gospels proclaims who Jesus is in its own way. Each gospel makes John the Baptist significant to how Jesus’ story begins.

Last Sunday, Mark’s gospel proclaimed Jesus is “the Christ, the Son of God.” Jesus is the messiah that Israel’s prophets promised God would send. John the Baptist becomes the last in this line of prophets, a voice calling people to turn toward God.

John’s gospel begins before history, before anything exists, in God’s realm. The verses that precede Sunday’s gospel passage form the prayer on the cover (John 1.1-5). These verses describe the Word who was with God from the beginning. The image of the Word grows out of the Old Testament wisdom books, written in the last centuries before Jesus. These writings emphasize God as Creator and personify Wisdom as a partner with God in making the world.

The wisdom and knowledge we humans acquire as conscious beings can reveal God to us. Wisdom is “a reflection of eternal life, a spotless mirror of the working of God” (Wisdom 7.26).

John’s gospel begins with 18 verses about the pre-existent Word who become flesh in Jesus. These verses include the three about John the Baptist that begin Sunday’s gospel.

The Baptist is a man sent from God as a witness to testify to the light. His witness has the same purpose as the whole gospel — that all might believe in Jesus through him.

The Baptist is a witness to the existence we may take for granted, the light that rises with the sun each morning, the air we breathe. To testify to the light is to raise people’s consciousness that the life and light in which we live reveals God and is God’s gift.

Like the people of Israel during their sojourn in the wilderness, the Baptist must have learned God’s nearness in the silence and solitude of the wilderness where he lives. His preaching opens people to God’s presence in Jesus, in whom Wisdom, the Word, has come into the world and become one of us.

Why is John the Baptist and his witness so essential to Jesus’ story? First, the Baptist gathers a company of followers eager to recognize God’s presence with them. Jesus begins his ministry among these openhearted folks.

Second, the Baptist speaks as a prophet in continuity with the prophets in Israel’s history. In fact, Christian tradition hears in the preaching of John the Baptist an echo of the voice that called captive Israel home from exile.

Third, the Baptist functions in John’s gospel as a legal witness. Priests and Levites interrogate him in Sunday’s gospel. His preaching has stirred interest. People from all over Judea are coming to hear his message. His questioners want to know if he is the one who fulfills God’s promises to Israel.

This dialogue suggests the richly varied ways in which people imagined the messiah and events they thought would precede the messiah’s coming. The prophet Malachi expected Elijah, who was carried to heaven in a fiery chariot, would return as the herald of the messiah (3.1,23). In Deuteronomy 18.15-22, God promises to raise up other prophets like Moses and put words in their mouths.

John the Baptist insists he is neither Elijah nor Moses but a voice crying out in the desert, “Make straight the way of the Holy One.” His role, like Second Isaiah’s, is to testify God will come to revive and forgive us.

John anticipates one greater than he is coming. He insists that “Among you stands one you do not recognize.” The words come down the centuries to haunt and taunt us into recognizing where we see Jesus among us.

Ours is the task of recognizing God at work in that hardest of all places to see—in ourselves, in our passion for justice, in the events of our history, in our own unrelenting efforts to hold our families and communities together. We live in an unfinished drama and unfolding mystery that is God’s life-giving presence with us. 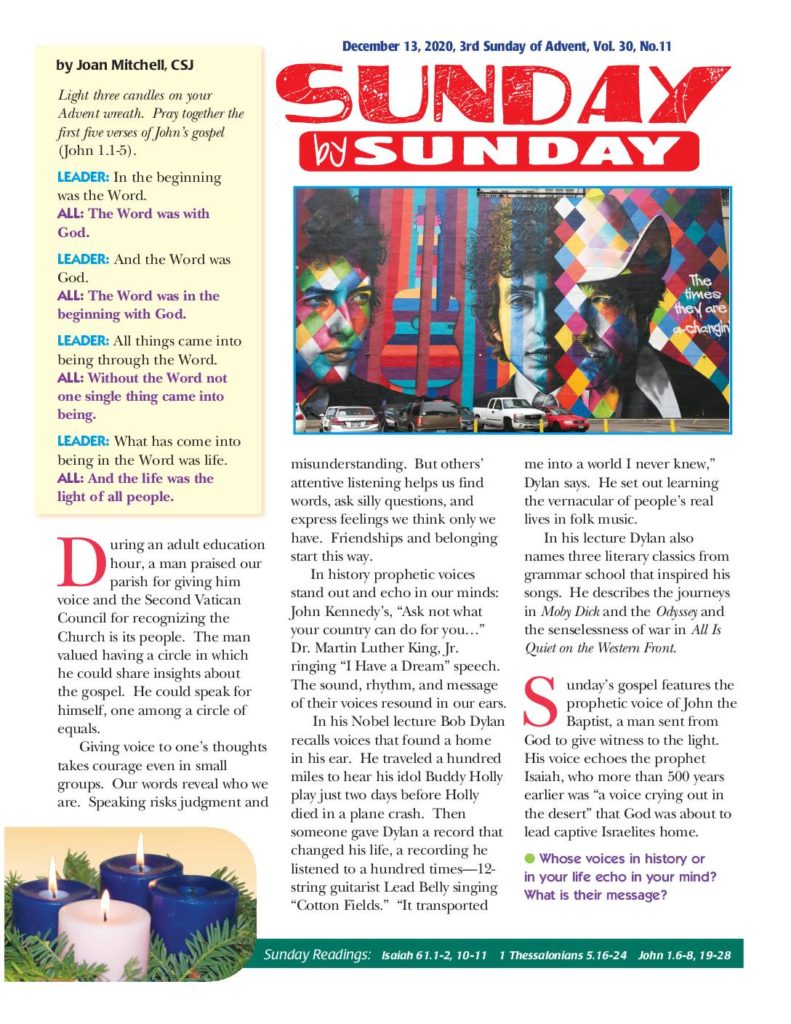