John’s discourse on the bread of life in chapter six is 72 verses long. The chapter begins with Jesus’ multiplying five loaves and two fish to feed 5,000 people — a sign which reveals Jesus’ identity as wisdom’s child, the giver of abundant life, the messiah. Two Sundays ago this sign story began the Church’s reading of John 6.

The crowd is a swing group in the drama of the chapter. They want to make Jesus king when he feeds them, but they want another sign the next day before they will believe he is the real bread from heaven.

Within the crowd is the group John calls “the Jews.” They don’t believe Jesus is the messiah. They question how Jesus can be from heaven when they know his origins on earth. This exchange reflects sharpening differences between the community of Christian Jews for whom John writes in the A.D. 90s and the Jews who follow other rabbis.

Both Jews who follow Jesus and Jews who follow Moses are children of the same parent religion. Both groups inherit Israel’s scriptural traditions. Jewish scholars don’t find evidence in the Talmud that first-century rabbis officially read Christian Jews out of their synagogues.

However, local groups may have magnified differences and sharpened boundaries just as before Vatican II Catholics bought only from Catholics. Vatican II eased such tensions with its emphasis on ecumenism. Abortion continues to create cultural fault lines politically as does gun safety.

Murmuring intensifies into open conflict in Sunday’s gospel. Murmuring is the same word the book of Exodus uses to name ancient Israel’s complaining against Moses and against God for bringing them into the desert without food and water. Their murmuring reflects a testing of their faith in the God who leads them.

Jesus’ claim to be the bread that came down from heaven sets the Jews murmuring. His claim tests their faith. Is God’s revelation only in the law of Moses and the God who supplied Israel quail and manna in the wilderness, or is God’s revelation in their midst in Jesus?

Jesus’ claim invites faith in him. The Jews counter with fact. They know Jesus is the son of Joseph. They know his mother and father.

All three groups in this chapter miss the point about Jesus. His disciples doubt their resources to feed the crowd. The crowd mistakes Jesus for a popular pork-barrel hero. “The Jews” openly disbelieve his claims that he, rather than the manna in the desert, is the real bread of life from God.

To contest the murmurers, Jesus argues that the revelation of God in Israel’s holy history and law ought to lead real believers to recognize God at work in him. Then Jesus escalates the conflict. He contrasts himself with manna. Israel’s ancestors ate manna in the wilderness and died. Those who eat the bread that comes down from heaven, namely Jesus, will not die.

A double meaning emerges in the conversation. When Jesus speaks of himself as the living bread, he invites faith not only in himself but in his eucharistic presence in the continuing Christian communities. The bread he gives in every eucharist is his flesh for the life of the world.

Cretin Derham Hall High School in St. Paul, Minnesota, raises money for Heifer International with an Empty Bowl project of making bowls and selling soup. Together they have filled many arks with animals for families in developing countries and people in need in the U.S. Plan to do the Empty Bowls project in your parish, group, or community center. Visit Empty Bowls online. Many cities describe their local programs. Or, fundraise for Bread for the World, or Feeding America. Involve families. 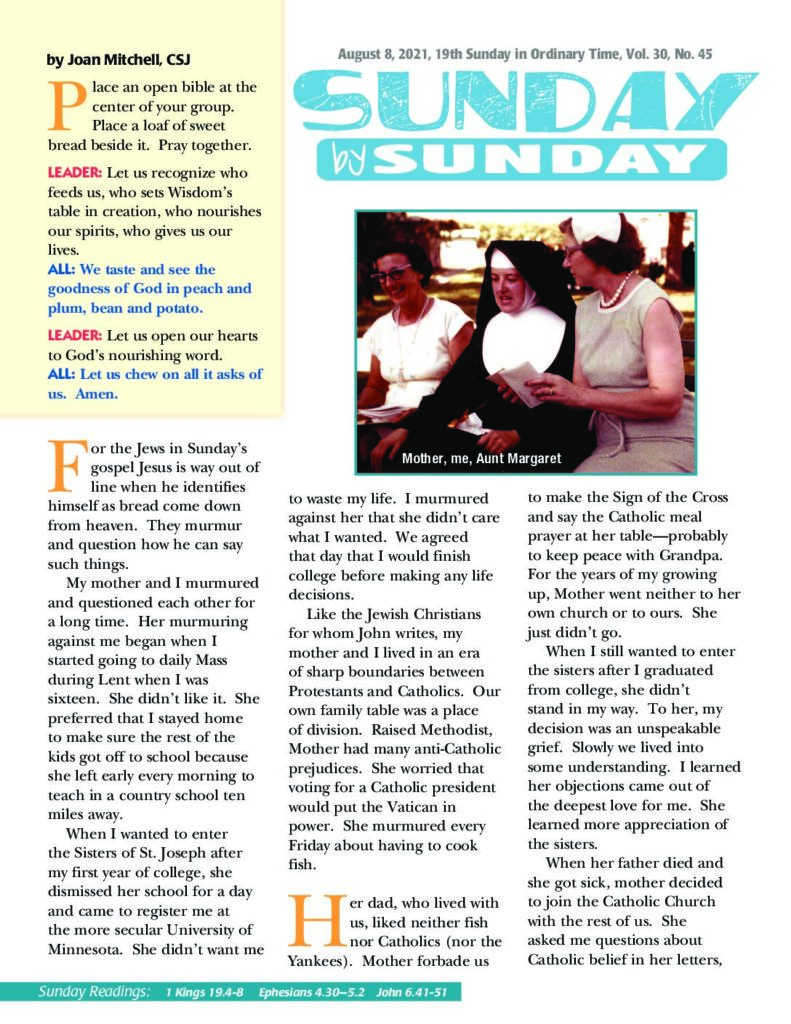