Sunday’s gospel is the first story in a long cycle of oral tradition. The cycle begins and ends with Jesus’ disciples together in a boat on the Sea of Galilee. A storm threatens to swamp them in Sunday’s story. A strong wind keeps them from getting to shore in the last. A boat full of Jesus’ disciples is a ready symbol for the infant church of the first decades after Jesus’ death and resurrection.

The musical “Hamilton” ends with Alexander’s death in a duel with Aaron Burr. His wife Eliza Skylar, who lived another 50 years, sings a final song, its repeated words, “Who lives? Who dies? Who tells your story?” Eliza tells Alexander’s story by not only telling his story but living it, helping plan the Washington Monument, founding a orphanage, speaking out against slavery.

Jesus preached, healed, cast out unclean spirits, and forgave sins in his public ministry in Galilee. He called together a band of twelve men and of women who followed and served him and accompanied him to Jerusalem. In the previous chapter Jesus taught the disciples the parable of the sower and answered their questions.

Jesus is the person in the gospel who lives, who dies, who is raised up to new life, He doesn’t tell his story; his eyewitness disciples do. They who heard his teachings and witnessed his healing and forgiving actions become the proclaimers of his good news. They gather in house churches, to break bread and tell his story. They live his teachings, and his story becomes their story, too.

At Jesus’ request the disciples are heading for the other side of the Sea of Galilee. The people there are Gentiles. The destination hints the role of Jesus’ followers to bring his good news to the nations.

Jesus sleeps in the boat as waves roll over the sides. How is Jesus present in the storms these first Christians face? In the nine stories in this oral cycle the eyewitnesses tell us Jesus’ story and invite us to faith like their own.

Today in our city we worry about storms as we await the jury’s the verdict on the police action that killed George Floyd. Some 3,000 National Guards are on duty deployed throughout the cities, including both business centers where we buy groceries. 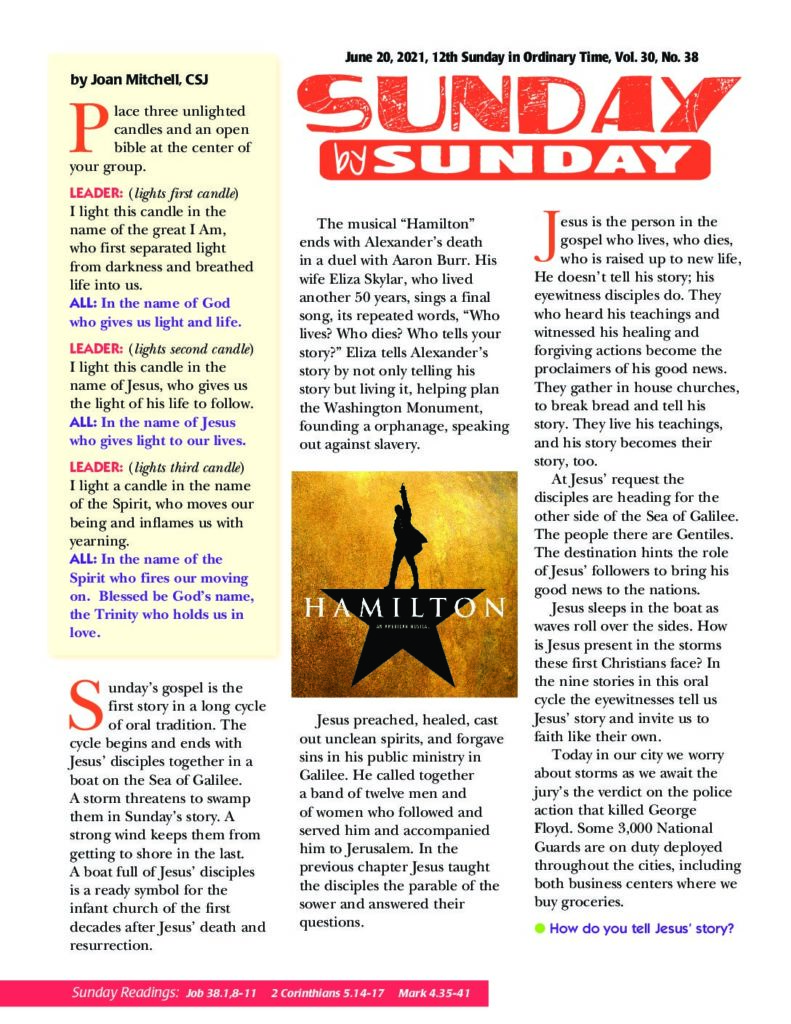