In this Sunday’s gospel the Church hears the first eight verses of Mark’s gospel, the first to be written. Mark begins his story of Jesus without elaborate fanfare. The author says nothing about himself and announces in a single verse the main claim of the new narrative: Jesus is the promised Christ (the messiah) and his story is gospel, that is, good news.

Mark includes no genealogies or birth stories, no accounts of dramatic portents in the heavens, but the first evangelist does carefully tie his gospel to the story of God’s people, Israel. For Mark, Jesus’ story begins with an ancient prophecy that John the Baptist fulfills. The Baptist is a voice like the prophet Isaiah of the exile, a herald crying out in the desert, “Prepare the way for God’s coming.”

To the Israelites exiled in Babylon (587-540 B.C.), Isaiah preached God’s comfort and forgiveness. The prophet saw in the victories of the Persians over the Babylonians the hand of God making a way home for them. The transcendent God who centuries earlier in the exodus made a dry path through the sea would make a way home through the wilderness.

By identifying John the Baptist with the Isaiah of the exile, Mark wants listeners to hear the Baptist as the herald of a new age of forgiveness and promise. God is faithfully present in Israel’s history, making a way where there is no way — in the exodus a path for slaves to freedom, in the exile a road home for captives.

Mark pictures John the Baptizer appearing in Elijah’s old wilderness haunts and wearing similar garb. For those who know Israel’s scriptures, Mark’s description makes apparent that the Baptist fulfills the prophecy that Elijah, who was taken into the heavens in a fiery chariot, would return.

Mark introduces John with spare detail. John preaches a “baptism of repentance for the forgiveness of sins.” Baptism refers to a washing that is part of a ritual of repentance. While priests washed before serving in the temple, purifying and cleansing themselves, Israel has no real precedent in its traditions for John’s dramatic baptism.

To repent is to resolve to change, to mark a new beginning. Bathing refreshes and reinvigorates. It takes away the sweat, dirt, and smell of past work and readies the bather for new company and activity. John uses bathing as a sign of people’s turning toward God in response to his preaching.

Like Elijah the Baptist haunts the wilderness. Like Elijah who discovered God speaking not in storms and lightning but in silence, the Baptist in the silence of his wilderness life senses God is coming among the people in a new way. His preaching and baptizing bring people into the wilderness and ready them for this breakthrough. His baptism washes away a past of simply keeping and breaking the law and symbolizes openness to the reviving Spirit of God.

John promises one more powerful than he is coming. He envisions that this coming figure will also baptize but with the Holy Spirit. Baptism in the Holy Spirit will create people anew more wholly than water cleanses and reinvigorates.

Significantly, John the Baptist’s promise of one who baptizes with the Spirit is never fulfilled within the parameters of Mark’s narrative. In Mark’s gospel Jesus does not baptize but is instead baptized by John. John’s promise of baptism in the Spirit hovers over the gospel narrative, the first of a series of promises that point beyond the ending of Mark’s gospel.

These unfulfilled promises tell us something important about the gospels. The story of Jesus continues into the future.

Mark wants his audience to recognize we are part of the gospel story. This is the beginning of a story that has not ended — and will not until the “owner of the house” returns.

This story is for all people and all times. John’s ministry is only a preliminary. He prepares the way for someone far greater. But his role of preparing the way is important. John prepares the way for our hearing of the gospels this year. He points to all that lies ahead for us. The coming year holds open the promise of one who gives the gift of the Spirit — to revive and forgive, to heal and free. 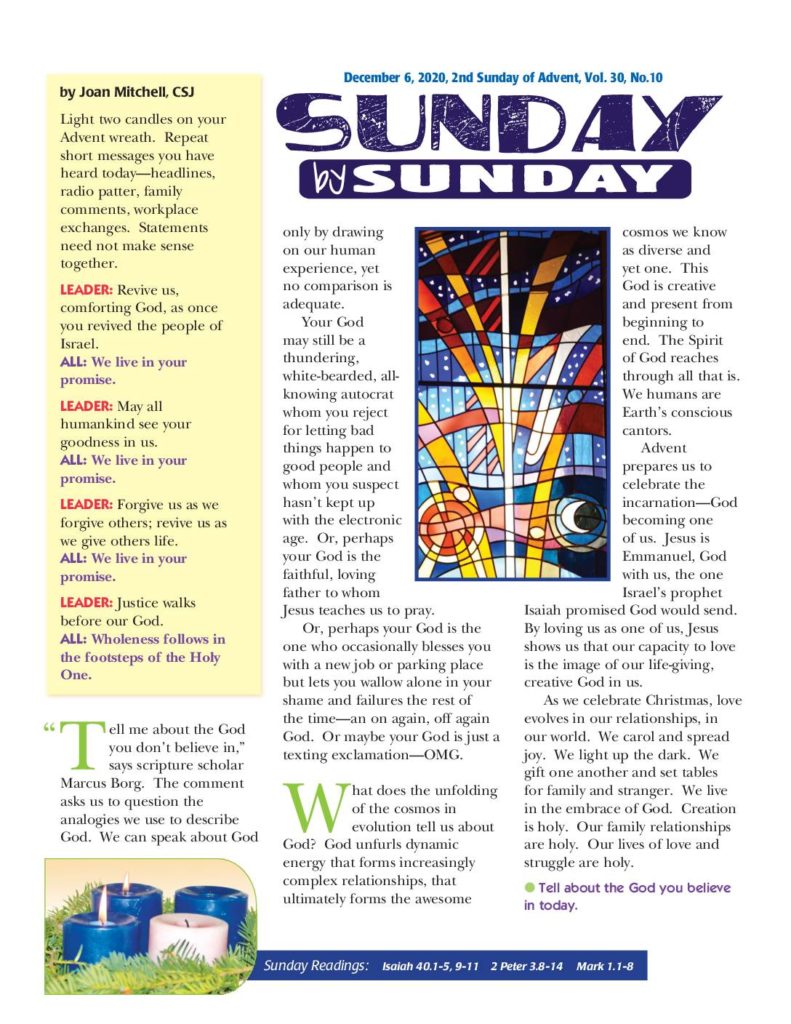