NARRATOR 1: When Jesus had crossed again in the boat to the other side, a great crowd gathered around him. He was by the sea. Then one of the leaders of the synagogue, Jairus, came and when he saw Jesus, fell at his feet and begged him—

JAIRUS: My little daughter is at the point of death. Come and lay your hands on her, so that she may be made well, and live.

NARRATOR 1: So Jesus went with Jairus.

NARRATOR 2: A large crowd followed Jesus and pressed in on him. Now there was a woman who had suffered from a flow of blood for 12 years. She had endured much under many physicians, spent all that she had without benefit, and rather grew worse. She had heard about Jesus, came up behind him in the crowd, and touched his garment.

WOMAN: If I but touch his garment, I will be healed.

NARRATOR 2: Immediately her flow of blood stopped, and she felt in her body that she was healed of her scourge. Just as immediately Jesus, aware that power had gone forth from him, turned about in the crowd.

JESUS: Who touched my clothes?

DISCIPLES: You see the crowd pressing in on you. How can you ask, “Who touched me?”

NARRATOR 2: Jesus looked around to see who had done it. The woman, afraid and trembling but knowing what had happened to her, came, fell before him, and told him the whole truth.

JESUS: Daughter, your faith has healed you. Go in peace, and continue whole and free from your scourge.

NARRATOR 1: While he was still speaking, people came from the synagogue leader’s house to speak to Jairus.

MESSENGERS: Your daughter is dead. Why trouble the teacher any further?

NARRATOR 1: Overhearing what they said, Jesus spoke immediately to the leader of the synagogue.

JESUS: Do not fear, only believe.

NARRATOR 1: Jesus allowed no one to follow him except Peter, James, and John, the brother of James. When they came to the house of the leader of the synagogue, he saw a commotion, people weeping and wailing loudly. Entering the house, Jesus said to them—

JESUS: Why do you make a commotion and weep? The child has not died but sleeps.

NARRATOR 1: They laughed at him. Then he put them all outside, took the child’s father and mother and those who were with him, and went in where the child was. He took her by the hand and said to her —

NARRATOR 1: This means, “Little girl, to you I say, arise!” Immediately the girl got up and began to walk about. She was 12 years old. At this they were overcome with amazement. Jesus strictly ordered them that no one should know this and told them to give the girl something to eat. 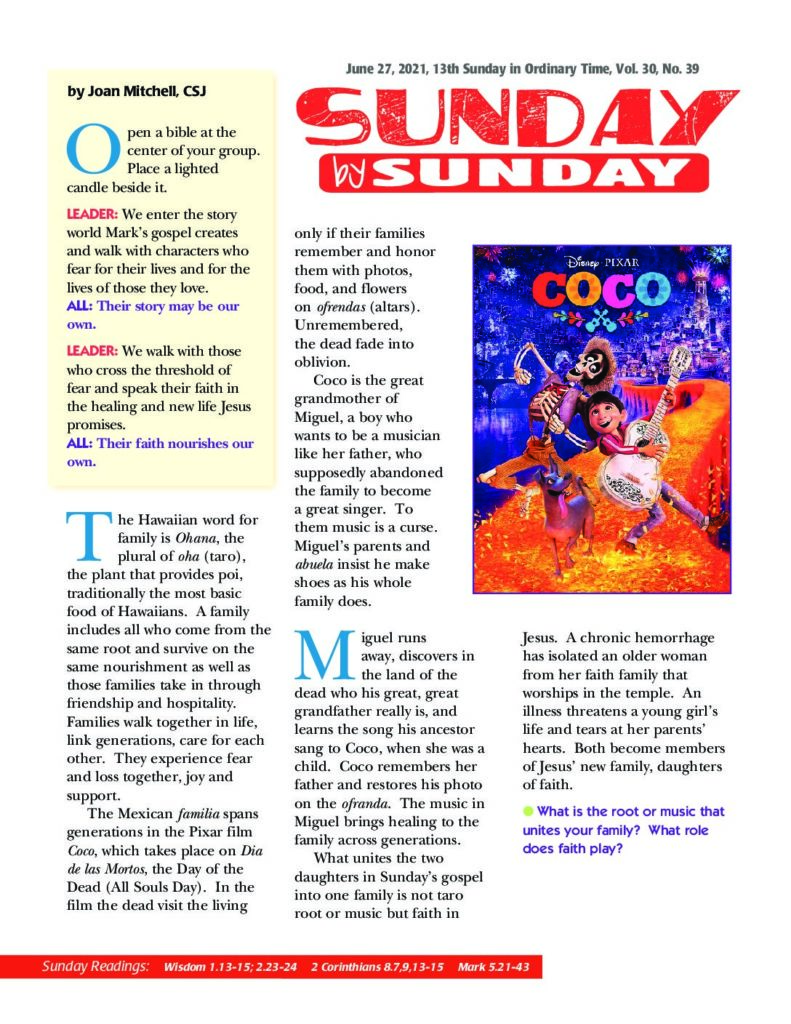